The Chasing Star (Na-ngasohu) Katsina is also called Comet Katsina and Planet Katsina. Hopi differ in regard to what this Katsina represents. Some say he represents a planet; to others he represents a meteor streaking across the sky. Chasing Star usually appears at the Bean Dance (Powamuya) or at a Mixed Dance. His function is no longer known. The Chasing Star's most identifying features are his enormous headdress of trailing eagle feathers (Plains Indian war bonnet style) and his turquoise, green, black or yellow case mask with its red-outlined star across the face and his red tab ears. This particular piece was carved in the 1970s by an unknown Hopi carver. He has a fur ruff and feathers on his back and in his tab ears.

Special Price $1,100.00 Regular Price $1,600.00
Be the first to review this product
Add to Wish List Add to Compare
Email
In stock
Skip to the end of the images gallery 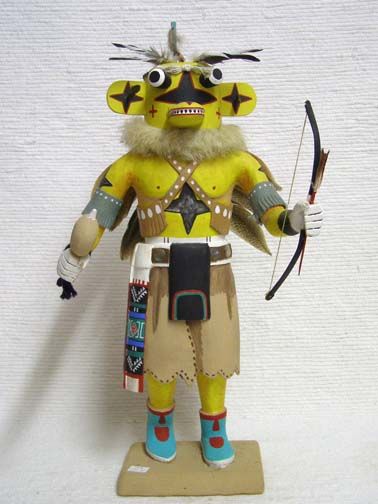