The Rattle Katsina (Aya) is rarely carved. His name is derived from his mask, which resembles a Hopi rattle given to children at the Powamuya or Niman ceremonies. Aya is a name for the Hopi dance rattles. These Katsinam come to ceremonies in pairs but race one at a time. Some Aya Katsinam carry yucca whips to swat the loser of each race. The Aya wears a mask with painted designs on each side. The turquoise represents the earth, the yellow the sun, the cross represents the four directions. The small white dot in the center of the design represents moisture. The mask is marked by a black design that looks like stitches. These stitches represent the Milky Way Galaxy, or where we are in the universe. Below him is the Prairie Falcon (Kisa), a runner Katsina. He appears during the Soyohim ceremony. Sometimes he carries yucca whips to punish the runners he catches. The crest of his head has a clump of feathers and he sometimes has wings or feathers for ears. Below him is the Mud Thrower (Tsukapelyu) who only appears during the fast parade and he carries clay which he forms into balls and throws at the spectators to get their attention and at the racers in hopes of slowing the racers down so the village people may have a chance to win the foot race. At the base is Kokopelli Mana who is a female racer Katsina who intercepts opposing racers and makes copulatory gestures to suggest procreation. This is a wonderful carving by Thomas who incorporated all of these racer Katsinam into one carving.

$750.00
Be the first to review this product
Add to Wish List Add to Compare
Email
In stock
Skip to the end of the images gallery 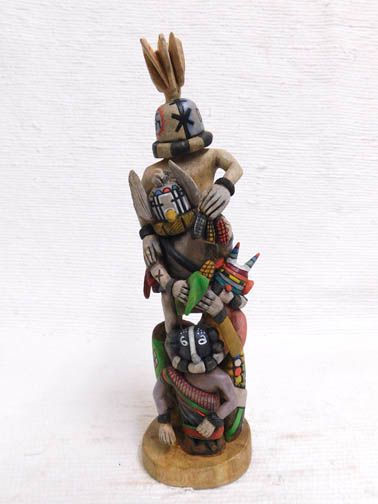