Description
Native American Hopi Carved Aholi Priest Katsina Doll by Bennett Sockyma
Aholi is a Native American Hopi high priest who appears only on Third Mesa and in the company of Eototo during the Powamuya Ceremony. This Katsina is the ancient of the Pikyas Clan. Legend has it that Aholi, left behind to fight a rear guard action, followed Eototo through migrations that took them from Mexico to Utah and from the Colorado River to the Rio Grande and back to their present location on Third Mesa. The two Katsinam come out of the Chief Kiva during Powamuya and perform the rites described under Eototo. Aholi is a beautiful Katsina in his cloak and tall blue helmet, but he is of less importance than the very plain Eototo and is often called Eototo's Lieutenant. When Eototo places his cloud mark on the ground, Aholi puts the butt of his staff upon it and, swinging the staff around, calls out, "A--holi-i-i-i" and then follows his chief to the next mark. His actions appear to be reinforcing Eototo's actions.
Dimensions:
13.25 in. tall
SKU
Bennett Sockyma--0621
$750.00
Be the first to review this product
Add to Wish List Add to Compare
Email
In stock
Skip to the end of the images gallery 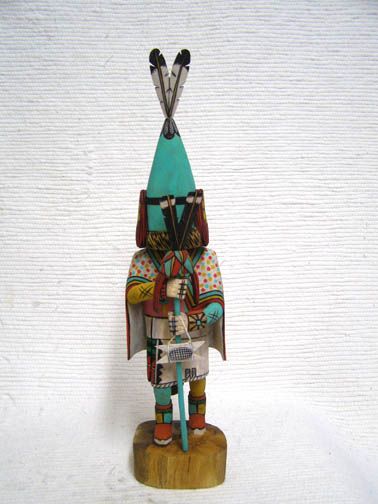