Description
Native American Hopi Carved Kokopelli Fertility Katsina Doll by Bennett Sockyma
The Humpback Flute Player (Kokopelli) is an engaging image that originated in the ancient Anasazi culture, and was brought into the present by the Pueblo Indians. This classic figure of a bent over stick figure playing a flute has been associated with shamanism and supernatural qualities. He is a magical being who, by playing his flute, calls the clouds to make rain. Today, the Hopi play flutes over the springs to attract rain. Kokopelli is also a symbol for fertility because he carries seeds and mist in his hump. He is mischievous when it comes to seducing young maidens! The Navajo counterpart to Kokopelli is the Humpback God who wears mountain sheep horns. His hump, which has eagle feathers radiating from it contains seeds and mist. He carries a wand and is called the "God of Mist," "God of Plenty," or the "God of the Harvest." He is nearly always portrayed with an image of corn. It is interesting to note that the hump, an abnormality, or deformity, is considered special, even magical and transformative like fantastic creatures, such as unicorns, griffins, etc. Shamans are often deformed or have narrowly escaped physical death.
Dimensions:
9.75 in. tall
SKU
Bennett Sockyma--0458
$750.00
Be the first to review this product
Add to Wish List Add to Compare
Email
In stock
Skip to the end of the images gallery 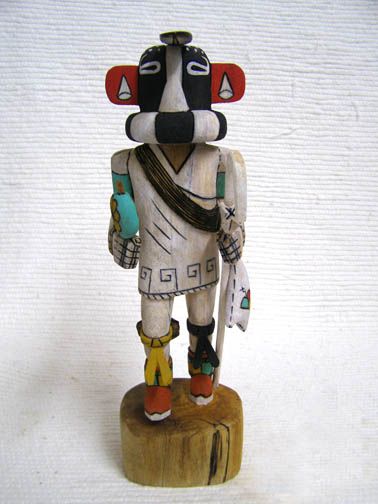