Description
Native American Hopi Carved Ogre Woman Disciplinarian Katsina Doll by Frankie Howard
Ogres (Tseveyo) are disciplinarians who appear around the time of the Bean Dance (Powamuya) Ceremony with the Whippers and at Angkwa with the Mixed Dancers. These Katsinam reinforce the Hopi way of life to the children of the Pueblo. The fierce and threatening behavior of these Katsinam strikes fear into the children, but they are eventually saved from imminent danger by the people of their Pueblo. These Katsinam are the equivalent of Boogie-men. The Black Ogre (Nata-aska), and the White Ogre (Wiharu), carry saws (sometimes a knife) as well as a bow and arrows for hunting. Their outstanding feature is their long, flapping jaws, which they can clack most effectively. These Ogres accompany Ogre Woman (Soyoko Wuhti) when she comes to the Mesas to tell the children they must gather food for the Katsinam. Nata-aska comes as well to show the children what punishments they may face if they do not do as Soyoko Wuhti asks. As a means of discipline, children are told the ogres can swallow them whole, unless they are good. In most ceremonies the Nata-aska Katsinam accomplish their objective and the children do as they are told. At the end of the ceremony, the men of the village are able to take back from the Nata-aska Katsinam the food they have gathered from the children. This particular carving shows an Awatovi Soyoko Wuhti who is believed to have come from the destroyed Pueblo of Awatovi.
Dimensions:
8.75 in. tall
SKU
Frankie Howard--0390
$750.00
Be the first to review this product
Add to Wish List Add to Compare
Email
In stock
Skip to the end of the images gallery 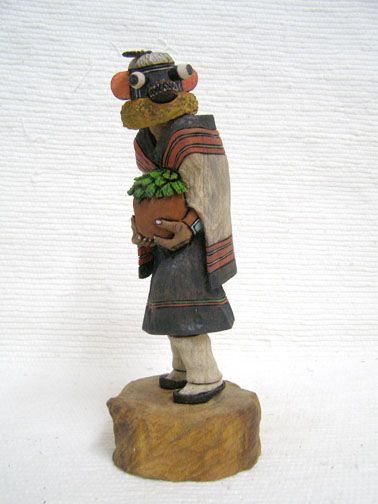