Description
Native American Hopi Carved Shalako (Salako Mana) Dancer Katsina Doll by Randolph David
The Shalako, who are believed to have first arrived at Zuni around 1840, retrace the wanderings of the Zunis from the center earth to the modern pueblo. The Shalako are the gods' messengers and run back and forth all year long carrying messages, as well as bringing moisture and rain when needed. When they leave, they also carry the Zunis' prayers for rain with them. The Shalako Ceremony is performed in late November or early December and takes place after the crops are in. This ceremony is the most important event of the year for the Zuni Indians of New Mexico. Because the Shalako are messengers to the gods, their departure at the ceremony is the final prayer for rain to fill the rivers, wells and springs before summer comes.
Dimensions:
10 in. tall
SKU
Randolph David--0897
$650.00
Be the first to review this product
Add to Wish List Add to Compare
Email
In stock
Skip to the end of the images gallery 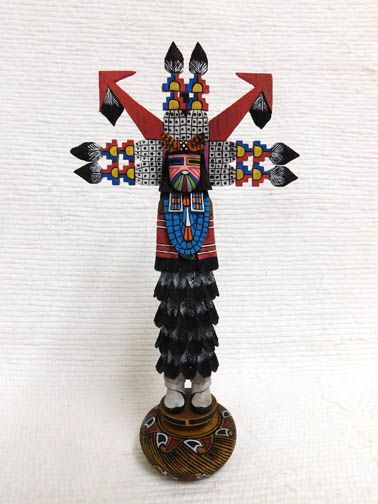 Skip to the beginning of the images gallery
Related Products
Check items to add to the cart or select all
Write a review
Only registered users can write reviews. Please Sign in or create an account
Compare Products
Compare
Clear All
You have no items to compare.
My Wish List
Last Added Items
Go to Wish List
You have no items in your wish list.
Default Store View