Of all the women who appear with other Katsinam, the Katsina Maiden, or Katsinmana, is the most prevalent. If she is carrying blue corn, she is known as the Blue Corn Maiden, similarly yellow corn, etc. She appears at Soyal ceremony and marks the beginning of the Katsina season by marking the openings to the kivas with cornmeal. She often appears in regular Katsina dances with household goods, accompanied by Long Haired Katsina. Her presence is a prayer for corn. She also honors Mother Earth and her continuing ability to feed her children. Placing this Katsina in your home, particularly on an altar, shows respect for the many gifts we receive each day from Mother Earth. This gentle maiden reminds us always to be thankful. A Katsina Maiden often will change her name to that of the Katsina with whom she is dancing, although her appearance does not change. "Yellow Corn Maiden appears with a variety of Katsinam, Angak'china, Ma'alo, Pawik and others. She may sometimes be seen with the Kocha Mana. They dance in a line separate from the other Katsinam but following the same pattern of dance, turning as the others do, gesturing as they do. Their only deviation is when they kneel and place large gourds on the ground to rasp." This particular carving by Calvin is of a young maiden with her hair tied up in squash blossoms or whorls. This hairstyle indicates that the young woman is single and of a marriageable age.

$300.00
Be the first to review this product
Add to Wish List Add to Compare
Email
In stock
Skip to the end of the images gallery 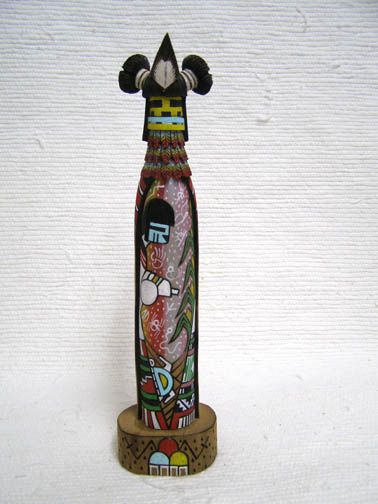