Description
1974-1978 Native American Navajo Made Necklace with Rainbow Man Naja by Harry Morgan
This beautiful vintage multistone necklace with benchmark beads and Rainbow Man naja was made by Navajo silversmith Harry Morgan. The stones are natural turquoise and spiny oyster. Each one is individually set and accented with roping. The stones are approximately .75 inch long. The necklace is 24 inches long and finished with a Double Rainbow Man Naja that is 2 inches tall.
Harry Morgan's jewelry looks as though it could have been made a century ago. The stamps he used to decorate his work were inherited from his parents and uncles if they were not his own. Much of his work was made with silver he rolled himself and he used only the finest natural turquoise. He put a satin finish on his jewelry to give it an antique look. Harry learned to silversmith while still in high school, and in 1965, after graduating, he began working with his uncles, Charlie Bitsui and Ike Wilson, two of the finest Navajo silversmiths. He won awards at every major Indian art show and had an exhibit featuring his work at the Heard Museum North in 2007, the year before he died.
Dimensions:
24 in. long + 2 inch naja
SKU
Harry Morgan--9743
$700.00
Be the first to review this product
Add to Wish List Add to Compare
Email
In stock
Skip to the end of the images gallery 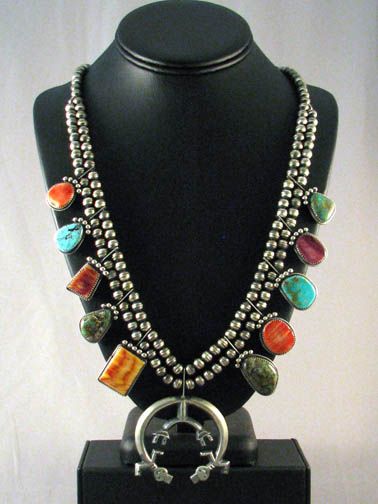