This beautiful older handbuilt and handetched pot was created by Corn Moquino (1929-2016). This pot is etched with hummingbirds and flowers all around. The black is from firing the red clay over and over again and polishing the piece between firings. It is the oxygen that is let in to the hot firing process that creates that blackened surface of the clay. Corn Moquino began making pottery in 1963. He is the son of Benina Moquino (Zia) and a Hopi father. He was married to Christine Herrara (Santa Clara) and created sgraffito pottery at Santa Clara Pueblo. His children Bernice, Melvin, Marvin, James, and Michael are all potters. This is a beautiful piece from a private collection.

$495.00
Be the first to review this product
Add to Wish List Add to Compare
Email
In stock
Skip to the end of the images gallery 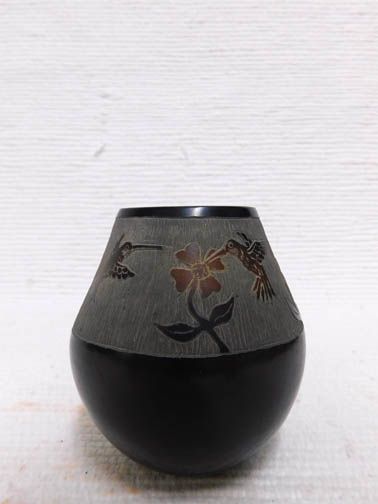