Corn Katsinam (Qaokatsina) are the most common of the plant personators. The Corn Katsinam appear during winter kiva dances and springtime plaza dances. Several types of Corn Katsinam represent the different varieties of corn given as presents during during performances. These Katsinam come in the four colors of corn (the four directional colors--red, yellow, blue and white). Sometimes they have ears of corn painted on their masks; other times they have spots painted on their bodies that represent kernals of corn. All of the Corn Katsinam dance to aid in the production of corn. Corn is the staple of Hopi life. Ryon was asked by the Heard Museum to work on a show for 100 Years of carvers. As he studied the older dolls, he became fascinated with the work by Wilson Tawaquaptewa (1871-1960). Wilson was known for his "imaginary" Katsinam because he believed that our imagination is much more powerful than reality. Ryon has focused on that concept with this and several other carvings at Kachina House.

$350.00
Be the first to review this product
Add to Wish List Add to Compare
Email
In stock
Skip to the end of the images gallery 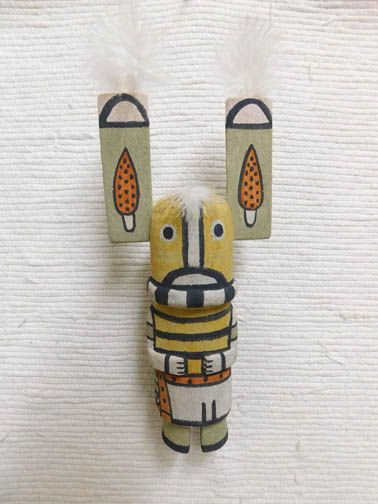