The Clown (Koshare) Summer Clown, is known by many other names, including Kaisale (Winter Clown), Tsuku (Second and Third Mesa), Koyaala, and Hano (First Mesa). The Clown has a complex ceremonial role, giving wisdom and advice as well as poking fun at unacceptable behavior. The Clown is said to be a glutton, always overdoing it whether he is making fun of the dancers, trying to get the children to behave during ceremonies, or commenting on Hopi behavior. They are generally amusing and do things that no Hopi or anyone else would want to be caught doing. They are often depicted with a watermelon. This particular clown was carved by Hopi carver Newton Honyumptewa in the early 1970s. This Katsina wears a cloth medicine bag on his neck and has cloth ties on his wrists and around his neck. He also is wearing (atop his carved blue jean shorts) a felt breechcloth. He stands with his hand up to shade the sun from his eyes. He carries a rattle in his left hand.

Special Price $600.00 Regular Price $900.00
Be the first to review this product
Add to Wish List Add to Compare
Email
In stock
Skip to the end of the images gallery 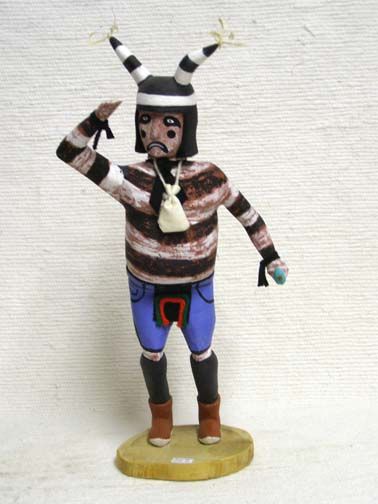