The Heheya Katsina has no English name or translation. Heheya Katsinam are most often seen on Third Mesa and act as messengers to the rain gods. The Heheyas dance on the side of the procession and guard the other dancers; they talk in opposites...for instance, if the dance is good, Heheya says it is bad. Heheya is a relative of the Ogre family and appears at Powamuya. The people of Awatovi village were being very "un-Hopi" in their behavior and were warned by villagers from other mesas to return to their traditional Hopi ways. The people ignored the warnings and as a result one night many of them were invited into the kiva for a game of chance, to gamble. When the people went into the kiva the villagers from the other mesas threw chili peppers down from the top of the kiva into the fire and the people were poisoned by the chili pepper gas and burned in the fire. One man witnessed this event and ran from Awatovi. When he tried to explain what had happened through his tears, which streaked his face, he babbled incoherently and staggered around. Surely a case of Post Traumatic Stress Disorder. The villagers were very afraid of this being and his erratic behavior. He is seen in contemporary times when the Ogres come to the village homes to take the children. Heheyas will sneak around ahead of the Ogres and suddenly appear in windows to startle everyone. They are frightening reminders of Awatovi and what can happen when the people stray from traditional Hopi life. This particular Heheya was carved by Hopi artist Ramson Honanhie in the mid 20th century. It is a fabulous Katsina with his fur robe, leather belt with tack conchos and shells hanging from the side. He is also wearing a wonderful red and silver bead necklace with a shell pendant. He has chilis atop his fur headdress and he carries a watermelon. His breechcloth is painted fabric, as are the ties at his knees. He also has a very old tag with a description of the Katsina.

Special Price $1,000.00 Regular Price $1,500.00
Be the first to review this product
Add to Wish List Add to Compare
Email
In stock
Skip to the end of the images gallery 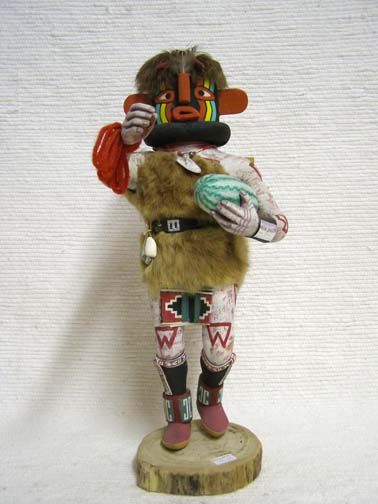