House of Rain by Craig Childs

"An adventure story, a history, and a cultural analysis all wrapped in exceptional writing."--Peter Warzel Rocky Mountain News

The greatest "unsolved mystery" of the American Southwest is the fate of the Anasazi, the native peoples who in the eleventh century converged on Chaco Canyon (in today's northwestern New Mexico) and built a flourishing cultural center, a vital crossroads of the prehistoric world. Their accomplishments--in agricultural, art, commerce, and engineering--were astounding. By the thirteenth century, however, the Anasazi were gone from the region. Vanished. What brought about the rapid collapse of their civilization? Craig Childs draws on the latest scholarship as well as on a lifetime of adventure and exploration in the most forbidding landscapes of the Southwest, to frame the question in a whole new light. House of Rain is a feat of historial detection, an enthralling revisionists portrait of American prehistory, a new landmark work in the literature of ancient Native American culture. Call for wholesale pricing.

$17.99
Be the first to review this product
Add to Wish List Add to Compare
Email
In stock
Skip to the end of the images gallery 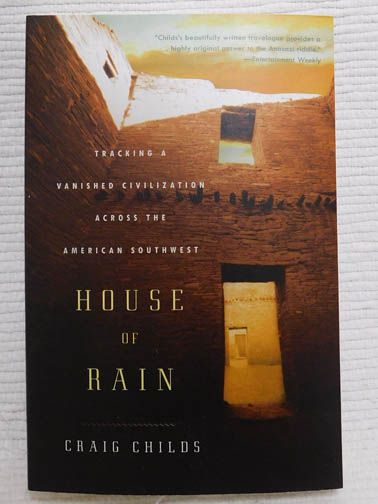